Leaf's faithful! By now...wait...whoa, there are so many more of you in here. What gives? So all it took to get the bandwagon back to full capacity was a good ol fashioned Calgary coup and previous-cup-winning goalie "trade."

How do we break this down. We've spent a lot of time justifying BB's trades (Kessel) so we don't really know how to break down a trade that seems like we totally took them to school. We gun-shy leaf followers are still waiting for the other shoe to drop, provided you put 2 first round picks in your loafers.

But there doesn't seem to be another shoe and the deals are final. Stajan, Hagman, Mayers and White for Phaneuf, the dude who rescued his father from a frozen pond and then squished people at the world juniors, and some younger, speedier, penalty-killier version of Wallin. Not bad. Calgary obviously wanted Hagman's goals, White's smart puck play, Stajan's afro and Mayers eyebrows. So they have Jay Bouwmeester essentially taking over Dion's spot on the blue line, so he was expendable. Expendable. Dion Phaneuf. Expendable. For three guys not in our long term plans and an arguably valuable dman in talks for a big raise? Done and done! Next.

J.S Giguere. We here at TOV have wanted him for a while; ever since he said he didn't want to stay in Cali. And when Hiller signed a few days ago, we smelt blood in the water. We even proposed Kaberle and Toskala for JSG and Bobby Ryan (who hasn't signed for the Ducks and is looking for big money which they don't have). We thought that was a pretty fair deal. But BB somehow figured out a way for them to palate Jason Blake, the pasty wonder with his anchor of a contract. So it is Blake + Toskala for JSG. Geeze. How does this benefit the Ducks in the long run? At all? Are they really excited about Jason Blake suiting up for them for the next couple of years? Are they really excited that if Hiller snaps his groin they may have Tosaka and Pogge in net? And if we are worried about that 6.0 mil cap hit, it's gone this time next year anyway.

We liked the Kessel trade, but we understood that we had work to do to justify it. But this feels like...well...like we don't have to justify anything. I can't believe we convinced someone Stajan was good, or Blake was the model of economic frugality. Has Phaneuf really fallen off the radar? (note: the biggest downside to Phaneuf playing for the Leafs is having to listen to McGuire say stupid things like "Double decker Dion destruction!" Ugh.)

Can anyone help me out? What are we missing here? I'm actually shocked with this whole thing. Even the cap numbers on our side are ok. Do Giguere and Phaneuf have a high probability of fail? Can anyone explain what either GM's were thinking? 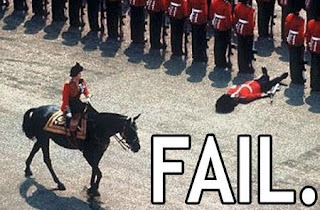 Faithful remnant! That could be referring to readers of this blog too. TOV is back up and running from a long Christmas break down in sunny sunny Texas. But we're happy to be back in hockey mad Canada. Not to say that they don't like hockey in Texas. Actually, I got to see the Stars vs the Sharks while I was down there with the Future Mrs. TOV. Actually, if you watch to the end of this highligh package you can see her as the unhappiest Stars fan in all the land. Apparently TSN had her on plays of the week too. Not me tho. I'm not a pretty lady so I got cut out. But hockey is alive and well in Texas.

However, it is sad to see that some things don't change in this bright shiny new year. Leafs still play well, then pinch out stinkers, then play a game where we all say "bbq! Playoffs!" and then another string of epic suck. Following that we have still been getting a string of articles that are equally as bi-polar: "Leafs stink. Burke can't build a team." "Wow, Leafs look impressive, Kessel a steal." "Wilson sucks, Kessel a 2nd liner, 2 first rounders" etc etc. Now, normally these articles are coming from local Toronto sports writers, so you can accept that they are going to be Gigli-Bad but this article by the Hockey News has really disappointed me. So lets analyze it in depth in hopes that we here at TOV can equip you, the loyal Leafs fan, with a keen mind and a stout heart so that you can cut through the haze of desperate writers attempting to save an industry.

"Imagine the buzz in Toronto today had the Maple Leafs not foolishly traded away their first round pick in the 2010 draft?

It's true. Instead we are talking about an aging team, full of over-the-hill veterans with no bright spots at all. We are crying out for a first overall pick--the obvious cure-all of any hockey club. Yes, its true. We want to be talking about hope. Help us to see the light, Brian Costello.

"Instead there’s panic and embarrassment imagining the likelihood of the Maple Leafs conceivably finishing last overall – or among the bottom five – and winning the lottery for first overall pick, then handing it over to the Boston Bruins as the first installment in return for Phil Kessel.

For Toronto, the Kessel trade was flawed from the second it was proposed. There was no chance he was going to lead the Leafs into a playoff spot this year and even if he’s somehow able to lift the team into 21st or 22nd or 23rd, it means the Leafs are giving up a prime pick this year (and next) and a second-rounder to boot. Remember all the buzz and excitement and kernels of hope last year’s seventh overall pick Nazem Kadri created in Toronto last June and during the World Junior Championship? Toronto gave two more of those away."

Ok kids. Time to play "spot the lie." Can you see it? I can! The lie is: all drafts are carbon copies of one another. A 7th overall pick in 2009 (Kadri) is the same as a 1st round pick down the line. They have to be. So if you got excited about Kadri, you now have to get as disappointed to the same degree that we are not picking out someone this year. Someone who is sure to be better than that lug we got instead. And he's not even getting us in the playoffs either this year. Jerk. And there's no guarantee he can get us there in future years. But 1st rounders can. (*note: look up Kessel draft year)

"How’s a team supposed to rebuild without young, cheap talent coming down the pipeline? A colleague argued Toronto could afford to give up the valuable first round picks because it had signed Tyler Bozak and Christian Hanson as free agents and they are effectively de facto first-rounders. Shame on the person who thinks a rebuilding team can give up any early draft picks."

Yeah! How is a team supposed to rebuild without young, cheap talent coming down the tubes. And thank you for pointing out Bozak and Hanson who are obviously not talented and who are way overpaid making the entry minimum salary. No, you're right, we cannot justify trading away first round picks even if we sign young free agent guys who are young and NHL talented. It's laughable to suggest that we should have even gone down that path going after undrafted guys. It's sure to fail. Replacing young potential NHL talent with equally talented NHL players. Disgusting.

"It’s such a shame the Leafs were seduced by Kessel’s age (21) and upside (40-goal potential). But they gave away the future to get him."

Geeze. How could we have been seduced by things such as "young" and "talented" and "40-goal potential" when we could have had the "young" and "talented" and "nhl ready" of the draft baby? I hope you are resisting the urge to link "40-goal potential" to the "they'd be talking about hope" of the opening paragraph. I assure you, they aren't related. At all. Cuz there were first rounders involved. First rounder means ipso facto dumb move. Hey! I can misquote latin too!

"It all comes back to the steep price the team paid to get Kessel. Sure, he may be a budding gem, even a 50-goal man some year, and the deal might have made sense had the Leafs been a top-10 team poised to crack the top five.

But for a team rebuilding, it made no sense then or now and will make even less each day we get closer to the April 13 NHL draft lottery and the focus shifts to a Boston-bound young star such as Hall, Tyler Seguin or Cam Fowler."

Hmm? What's that? 40-goal scorer? Cmon, stop being a stupid leafs fan. He's actually a potential 50 goal scorer now! Gotcha! A budding gem! But it doesn't make sense for a team so low in the standings to want things like 50 goals from a 22 year old veteran (yeah, dirty word right? Am I using it right?) That only makes sense if we were like, you know, a better team. It's a proven fact that teams lower in the standings don't like goal scorers. Look at their stats. Less goals for than goals allowed. See? They are adverse to goal scoring. Stats never lie. Bottom line, this deal didn't make sense. A 22 year old injury-prone veteran with a bad attitude on a rebuilding team is a bad hockey move. We will be ruing the day Kessel scores his 50th goal while Seguin suits up for the Carolina Hurricanes.

So stop hoping that a young, unproven player can get you to the playoffs. Because Kessel can't seem to do it. But we should have kept our 1st picks so that these young, hungry draftees can bring us up the standings. Burke must have the investment strategy of this guy.

Youth like Kessel and Bozak and Hanson is bad because we're not a good team (and playing for us may shatter their fragile psyches.) Oh, but youth you can draft is good because we're a bad enough team to draft them and since they are first rounders they are necessarily good and then the sign of a good team. And if they are good we are good and no longer bad, so then we can go after good players. Like Kessel. Except that it's bad to trade for good players, or at least its bad to trade future good players for present good players. So don't trade the future for the present. Even if it is a good present with strong potential to be better than the future. Cuz it's the principle of the thing instead of how it actually breaks down in a couple of years.

See y'all next year!

Faithful remnant! I'm off to the Big D for the holidays (I'll be a the Stars game tomorrow too...so if you happen to watch it, you may wanna go back and reread the guide to watching Stars games post)

See you all in the new year, and we'll chill out and talk about playoffs (!!1!) and epic Monster saves and like, all that stuff, cuz, like, let's totally stay friends once camp is over!