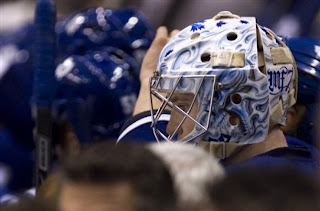 Or, if you've lived in Toronto over the last few days, happy monsoon season! There were some here at TOV who thought that the storms of the past few days were the final wrathful apocalyptic acts of the hockey gods, upset by our munchkin commish's reign of error. Indeed, we dusted off our "the end is near" signs and started handing out maps to our secret mountain compound. There was debate whether we should dry store or freeze store our emergency seed supply, but by then the rain stopped, the great oracle read the animal innards and told us that it was not wrathful gods but just a crappy summer and we went back down to DEFCON 4, "Code: Mogilny."

But that DEFCON level may be a-rising with the recent news, illustrated here in The Star (yucky, I know.) They claim that the Leafs are shopping Pogge! Now, normally we here would read the Star's article with our coffee and say to our Toronto bourgeois selves, "so this is what news is like north of Eglington...and not even one rhetorical trope or literary reference in sight!" and then we would laugh it off and go to MLHS or PPP for our real Leaf's news of the day.


Normally. Except for one lil scary bit in the middle of that article. You know, that part where Brian Burke says, "we are actively shopping Pogge so he can go play somewhere else." (or: "I have promised Justin I will try to find him a place where he will get a better shot," for those who are link adverse.) And we know Signor Malcontentay means it too, because that's the same line he gave during the whole putting-Kronwall-on-waivers-so-he'd-go-play-somewhere-else deal. Now, is Burke being a nice guy, or is this a better way of saying "goodbye, unwanted part" without actually saying that they stink.

But therein lies the debate: does Justin Pogge suck? Seven months ago he was still the crown prince of the organization, sent from above to shepherd his people to the land of milk and honey and grapes the size of habs forwards (adorable lil forwards!) Remember all those Howard Berger articles where he called us stupid to be rooting for a player playing for a team that we cheer for and love? But now he's earned the Brian Burke "I owe it to the player" kiss of death?

So faithful remnant, we have 2 options:

Pull that trigger Burke. Dude was 1-4-1, 0.844% and 4.36. I get better stats in ball hockey [aside: need a ball hockey goalie in the Toronto area, hit me up]. I remember the poor leaf homer who picked Pogge for his fantasy team in my league. He had some dark days, let me tell you. [Aside: Fantasy rule #1. Keep emotion/fandom out of it].

Secondly, maybe there are some GM's out there who remember the 2006 World Junior shut out of ze russians. Let's play that up and see if we can get some kind of return on him, or package him with Kaberle for some sort of obscene monster deal.

Thirdly, we've got Jonas "I can peer into your soul"Gustavsson, and James "No google images for me" Reimer. That spells future tandem, children! We're set. We don't need no Tukka Rask (aaaaaaaaaAAAH.....Freak Out!) and we don't need no Justin Pogge (or thought contraul). So lets turn that G into an F (Downie plzkthxbai).

Take a gander at who won the Vezina this year. Was it Luongo in Vancouver? Or was it Nabokov in San Jose? Nope. Tim freak'n Thomas. One night, the Bruins GM needed a goalie, went to a local Boston pub, found some guy and put him in net. I swear, the Vezina trophy this year is the same plotline as The Rookie. Except we suspect that its more like the plotline to Angels in the Outfield, because divine intervention by Christopher Lloyd is the only way Thomas made half those saves this year. And don't look at us to explain it, we just deal in Leaf's divinity.

But back to the argument: Tim Thomas won the Vezina. He spent years playing around Europe, honing his craft, learning about loss and hardwork and dedication and really really wanting something (maybe something some young hotshot who say's he's "naturally ripped" in a cribs episode could learn). Can we give goalies out on loan? Send him to Sweden or something. Get some culture and puckstopability and come back all zen and Gustavsson-like--the apparently ultimate butterfly "Monster" goalie. (hmm...butterfly monster eh?)

Bottom line is that goalies take time to develop, and it ain't no science. It's not really an art either. Some sort of weird voodoo magic? Finnish food? Who knows. But the argument is, is that Pogge's got the tools, he just doesn't have the structure. So maybe he should stay in the place that just hired the best goalie coach in the world who loves athletic giant goalies like Pogge. Is there a real harm to have him duke it out in the Marlies with Reimer. Let's see if this kid really wants this. Earlier in the season Burke said himself that Pogge hasn't earned his way on to the team, but has he really earned his way off to another? Sure he may be a bit cocky and channeling the ghost of Ray Emery a bit, and sure I'm personally way more excited about cool and calm goalies like Gusty and Reimer, and sure Ron Wilson threw him under the bus but is it really time to take this mutt to the rural vet? Can't we gauge (pardon the pun) to see if he is a hungry hungry hippo, or just a regular hippo?

So let's hear it, faithful remnant of leafs nation: Pogge out? Or Justin.

p.p.s. and thanks so much for reading. I appreciate all the support and comments. It's nice to be liked by fans of the team you love.

Posted by Graeme Donaldson at 8:06 PM

Labels: Pogge, seriously, surely we don't have that many prospects

Damien here...Shhh about his stats 67 and admitting you don't want him 67. You're ruining his trade value 67.

This is how it will go down. We will trade Pogge away, thinking he will be bad, and keep Gustavsson. Gustavsson will turn out be a great goalie, however Pogge will make it his personal vendetta to get back at Toronto for this. 3 years from now, we will field a great contender and start getting excited about our Cup run. We'll get to the finals and be chanting "Monster! Monster!" all the way. Game 7 of the Stanely Cup finals - we will lose. Single handedly to an unbelievable performance to Justin Pogge. It's the Toronto luck.

furcifer, oh man. Thought it actually was Cox for a second. Hilarious. 67

Or Reimer will beat him in a shoot out....well not in game 7 of the Cup but Reimer and Pogge played against each other a lot in the WHL and it's been awhile but I think hands down, Reimer beat Pogge more times than Pogge beat Reimer. Pogge played for the Calgary Hitmen, Reimer for the Red Deer Rebels. They were division rivals and in one of the last games of the season, Reimer, who sustained a broken hand in the last 5 min. of regulation but refused to come off the ice, beat Pogge in a shoot out. I have always thought Pogge and Reimer in tandem for the Marlies would create amazing competition and therefore, exciting hockey down there in the centre of the universe. An infusion from the west might be what Toronto is missing...lol...

Exactly. If I'm a goalie for the Marlies, am I going to give it my all every night if Sucky McSavesanone is the other backup? Probably not. But if I know that I lose a game, or have a GAA over 2 or a SP under .900 that I'm sitting next game, I'm going to try a bit more in practice.

Man I hate that PPP actually shares the links to your shitty articles. Stop writing.

Updated with the Downie hit on McAmmond. Upon further review, is the hit really that dirty? I guess he does kinda leave his feet.

GB-
In your honour, I think I'll take that lovely anonymous comment and feature it in the next MBA. Refuses to come out of the woodwork with a handle, too stupid to learn punctuation, and actually takes the time to write a totally useless comment after reading an article he would've hated no matter what, because he's a Cox-sucker and Damien told him all Leaf bloggers are terrible. Especially those animals at Cox-Bloc.
Keep up the good work- we love ya.

The McAmmond hit. It could go either way. I think he was thinking "go through Dean" and ended up going over due to how low McAmmond was skating. At any rate, 20 games was way too much. And I'd rather have Zach Kassian. Both were Peterborough Petes, and the general local consensus is that Kassian is the next Lucic, maybe even better, and Downie, well, don't let your kids play on the same ice as him. :)

Oh yeah. I'd love Kassian. Thing is, I just think we'd have a better shot at getting Downie for something inexpensive. I suspect that Downie is the kind of player that needs a pressure-cooker environment to succeed. He ain't getting that in TB. Could have got that in Philly, but they bailed on him too quickly.

This is true, GB. I'd take Downie for cheap in a heartbeat. If Burkie can harness his ferocity, he's a nasty piece of work.
If I played pro hockey, I would not want to get on the ice with him, Orr, Exelby and Happy Trails. Period.
Actually, the more I think of this, the more I like it. Like they say, he may be an a-hole, but he's OUR a-hole.

I'm the Anonymous from the West and 'dumping the kid' is way too harsh. He's a good goaltender with potential to play well. TML made a big mistake by setting their stakes on an unproven, starry eyed kid who won a gold at WJ's but didn't earn his spot in TO. It was handed to him and it was a disservice in the highest degree.