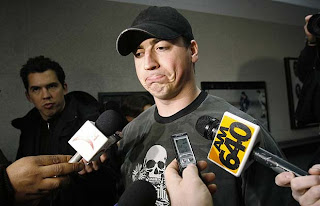 Oh Kaberle. Perhaps our greatest late round pick ever. You've been a trooper haven't you? Those cherished moments on the powerplay where you have an open shot on net, with the whole crowd yelling for you to shoot (or trading futures on their Blackberries if you're in the lower bowl) yet you unselfishly pass it off to your pairing D-man, who--if you are McCabe circa 2006--buries it with the usual post-goal flourish, or if you are Kubina circa 2007 you wind up but blow out your knee, or if you are Antropov your stick explodes and you stand in the offensive zone like a big Kazakh Antropylon. But I loved you for it Kaberle.

Or remember when you would get McCabe's nervous cry of "oh crap oh crap I'm in my own end and there's like....a...FORECHECKER. WhatdoIdowhadoIdo!?" Yes, your soft words and calm gazes would direct his hesitant back-board bounce pass to your waiting embrace and you would calmly double-line pass that sucker to Sundin who would backhand it top-shelf, or to Poni who would backhand it towards the zamboni door. I remember those days, and I loved you for it.

But you see Kaberle, these days our best forward is a long-haired, knife weilding Haley Wickenheiser lookalike (look it up yourself. Fo serious), and our best prospect--Kid Kadri (de-de-de day and night) is probably a year off, or he could Stamkos it up this year and get a serious case of 4 goal and major sniffles. You get what I'm saying Tomas? You are slowly falling into that "sell high" side of hockey.

So what are we to do with you, my Czech mate?

Well, we got two options with rationale and reasons behind them. So let's look at what we got.

You get about 50 points, mostly assists. You mysteriously never age. Other teams kinda stop and watch you skate...seriously, you've got this Neo thing ("whoa") goin on when you skate. Time seems to stop and the opposing players get all shy and bashful like when a kid meets a new person for the first time. Not to mention your contract, with its easy drinking taste and...um...I dunno. Triple filtered?

We'd be stupid to lose you, right? Screw the lil smurfs on the back-end trying to make it in a new scary world. Let Ian White and Anton Stralman have a fussball tournament every night to see who "gets" to play with Jeff Finger. We can pair you up with Francois Goodtrail and let him squish people and let you do yo thang. There's nothing I love more but to see you send that outlet pass to Jason Blake and watch him ignore his teammates, ignore the defender and barrel headfirst into the keeper. He's kinda small and rubbery. Do we get a point if Blake goes in the net?

So maybe you should stay.

Sundin, he ain't coming back child. He's playing poker or crank calling Mike Gillis or swimming through his big pile of money. McCabe is gone too. Sure he couldn't do anything except launch slappers after butt-tackling was made illegal, but he sure could launch em. And you gave them to him. Kubina is gone too and he was a better dman but not as good shot as Caber. Who are you going to pass to? XLB? Frogren? Let's face it, our d corps would play with caveman clubs if they could. There wont be a ton of point shots next year. And we sure know that you break out in a funky rash every time you shoot. Why else wouldn't you do it, Mr. Accuracy Skillz Champion?

And even though you have the facial maturity of Danny Briere you actually are getting up there in age. By the time lady window comes-a calling your puck dishing days may be well behind you.

Yes, yes, you're great and wonderful and guys like you don't grow on trees, but its not like the puck is never going to get out of our end if you're gone. It just wont get out of the zone with the same Shaolin grace and spiritual clarity that we as fans are used to. But, come on, are you telling me Komisarek can't dump it around the boards? All it'll mean is that Stajan wont be getting any more breakaways where he double dekes and sits down and weeps.

It has been widely reported that you were almost traded to Boston for Phil Kessel [Fun aside: I've always wished that when a trade goes down, the two teams go stand at opposite sides of a bridge and the two traded players have to cross the bridge and glare at each other like they do in hostage swap scenes in movies. Who's with me?]

Now, would Kessel be the man? I dunno, but the dude did survive cancer, and we ain't talkin no skin cancer either. That's hardcore. I'd be pretty happy with Phil Kessel on our top line. Him and Kid Kadri? All you would need is one good free agent signing next offseason and you have a bonafide top line that could get you deep in the post season one day. Besides, who needs a pretty outlet pass when Schenn and Komisarek are going to be supplying human sacrifices to the god of open ice hits (Ares?)

So go make your way in the world! You may even win a cup in Boston.

Don't weep for Kaberle friends, this is a healthy part of the cycle--The Epic Build--that I hope we are now on. Sell him off to the highest bidder, let a little smurf (looking at you, Signor Mustachio) step up and if he can't do the job, we restructure the way we get the puck out of our end.

So we here at The Other Vatican have lit a little candle under the icon of St Brian. Will our invocation be heard? My guess is that he's already on it.
Posted by Graeme Donaldson at 10:27 PM

Sorry dude, it wouldn't surprise me in the least. He's up for a contract renewal right when our window will be open. What happens if he demands money we don't have?

Maybe not "never" but we would certainly be reducing our ability to counter-attack. Kaberle will get the puck up ice 19 times out of 20. For everyone else in the league it's about 50-50. Against teams that play a suffocating trap, having a player like Kaberle is your best chance at nuetralizing that advantage.

The main reason I'd like to keep Kaberle though is purely sentimental. He's been with the team longer then any player we have currently, and this season he is poised to eclipse several players on the Leafs' all-time points list, including Tim Horton, to become the second highest scoring defenceman in Leafs' history.

You can beat the trap by being able to take a hit check while dumping the puck in the zone. With the trap, you just don't get a lot of space in the neutral zone, but if you have bigger D (like we'll have next season) you can absorb the trap by being able to make plays with a guy checking you.
But its true: lose Kaberle, lose Kaberle's abilities. We're gonna lose him eventually, and if a first line forward with potential star power is on the table, I say we take it.

I also agree with the sentimental reasons and I totally acquiesce to them. If Kaberle goes, I'll go to the vigil for sure.

It's way too easy to say something like "We're gonna lose him eventually..."

If Kaberle goes, you're not invited the vigil.

Nothing honors the departed player like competing vigils! It's like making the dog choose who it loves more.

As for saying he's gone being easy to say...well...that's cuz its easily going to happen. Bottom line is that we need a top line player, preferably two. Kabby can get us one.

That being said Burke has said that he isn't moving Kaberle unless his socks are knocked off, and since Burke has that no BS reputation, I'm going to say that Kaberle will probably be on the team next year. But this looks like a sell sell sell situation to me

I think Burke recognizes Kabby's value. And the fact that on a team of rugged d-men, there's clearly a role, and a big one at that, for Kaberle to play.

And we just got our top line player, in Kadri. Let's give him some time to develop.